Follow Nordpil on Twitter!
Save & Share this link on social media, for blogging and for bookmarking
Nordpil offers freelance consultancy services in custom map design and cartography, in illustrations (charts, diagrams and other graphics) and in geographic information systems (GIS) including research and data preparation. Map design includes interactive maps (WMS, ArcIMS) and thematic maps. In addition we provide training in better visual communication and map-making.
September 11, 2012

The sea ice extent in the Arctic ocean reached a record low for the month of August 2012. A warmer than normal melting season has decreased the ice to 4.72 million square kilometers, breaking the previous record melt in 2007. The sea ice in the northern hemisphere is an important indicator for global climate change, and global warming due to the greenhouse effect (from the use of fossil fuels and the release of carbon dioxide, CO2, in the atmosphere). Permafrost, global sea level rise and the state of the arctic tundra (including tundra vegetation) is another indicator. For more information about climate change and climate science, please refer to the IPCC, including the IPCC fourth assessment report.

I have prepared maps of this before - see these maps at the UNEP-GRID/Arendal maps and graphics database: 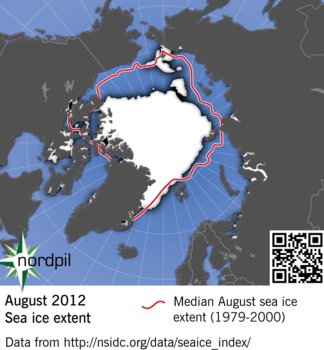 The Arctic ice data is quite easy to get access to - it is available for download in shape-file format (and other formats) from the National Snow and Ice Data Center  (NSIDC) in the USA. The Sea Ice Index - derived from satellite imagery analysis, can of downloaded in shape-file format for use in GIS systems.

I prepared the map using data from Natural Earth in a Lambert Azimuthal Equal Area projection (Wkid 102017), centered on the North Pole.

A tricky thing with this map is to get the focus on the Arctic sea ice extent, which ideally should be presented white or at least a light gray (possible with an ice-like texture?) - while still maintaining good figure-ground (clarity in what is land and what is sea). Maybe I went overboard with the little shades and textures in this one!

Data preparation was done in ArcGIS and the map was finalized using Adobe Illustrator.

The versions of the maps linked here (the png high-resolution map, and the jpg low-resolution map) are both published for unrestricted download under a Creative Commons Attribution 3.0 Unported License. Please inquire for availability of high-resolution illustrator/pdf version for print usage.