Follow Nordpil on Twitter!
Save & Share this link on social media, for blogging and for bookmarking
Nordpil offers freelance consultancy services in custom map design and cartography, in illustrations (charts, diagrams and other graphics) and in geographic information systems (GIS) including research and data preparation. Map design includes interactive maps (WMS, ArcIMS) and thematic maps. In addition we provide training in better visual communication and map-making.
February 14, 2013

A heart map for Valentine's day 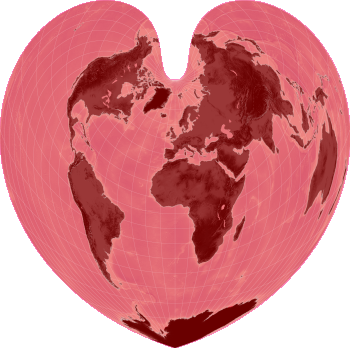 I thought I would spend a short while to experiment with the Bonne projection, which I have never used before - it doesn't really have that much uses, even though it is equal-area. Most of the World comes out ok, but Australia and Indonesia look a bit too distorted, as well as South America.

All the data was prepared and lined up in ArcGIS (ArcMap) and then taken from the GIS (Geographic Information Systems) side to the graphics preparation. The backgrounds were tweaked a bit in Adobe Photoshop and all the data and backgrounds were put together in Adobe Illustrator.

What do you think?

I have already found some things that I could improve for next year... Masking the Caspian as a sea area, for one thing, and also using 10E as the central meridian for the projection (so that that sliver of Chuktoka doesn't get cut up... Hmmm, and maybe major rivers as veins?