Follow Nordpil on Twitter!
Save & Share this link on social media, for blogging and for bookmarking
Nordpil offers freelance consultancy services in custom map design and cartography, in illustrations (charts, diagrams and other graphics) and in geographic information systems (GIS) including research and data preparation. Map design includes interactive maps (WMS, ArcIMS) and thematic maps. In addition we provide training in better visual communication and map-making.
February 14, 2014 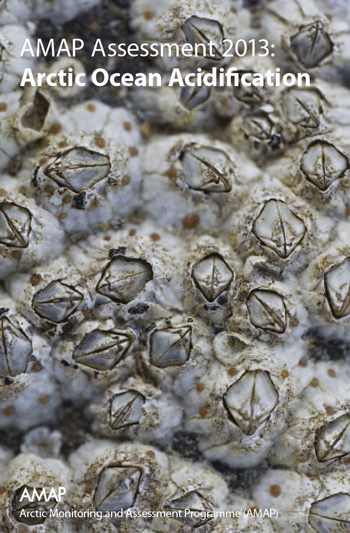 The Arctic Monitoring and Assessment Programme (AMAP) is an Arctic Council working group focusing on environmental pollution and its effect on wildlife in the north, as well as on Arctic peoples.

The 2013 scientific report AMAP Assessment 2013: Arctic Ocean Acidification presents the results of a study including contributions from scientists from throughout the circumpolar north.

Ocean acidification is occurring at a rapid and accelerating pace, and the Arctic Ocean is on the frontline of this global change. AMAP’s 2013 assessment of Arctic Ocean acidification provides the first Arctic-wide perspective on today’s progressively increasing seawater acidity. The assessment report presents current scientific knowledge on the changing state of ocean acidification in the Arctic and how these changes are affecting the Arctic marine environment. In addition to reporting on what is happening now, the assessment considers how these trends could continue to develop in the future and what they could mean for Arctic marine plants and animals – and Arctic peoples.

Hugo Ahlenius of Nordpil prepared maps, charts and diagrams for the report, and handled some of the data management. Illustrations were prepared using GIS data delivered from scientists, as well as marine measurements visualized using Ocean Data Viewer.