Follow Nordpil on Twitter!
Save & Share this link on social media, for blogging and for bookmarking
Nordpil offers freelance consultancy services in custom map design and cartography, in illustrations (charts, diagrams and other graphics) and in geographic information systems (GIS) including research and data preparation. Map design includes interactive maps (WMS, ArcIMS) and thematic maps. In addition we provide training in better visual communication and map-making.
December 19, 2011

Animated maps: 20X0 – A Journey into the Future 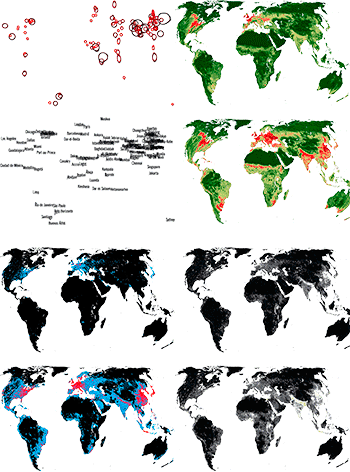 The exhibition 20X0 – A Journey into the Future is on display at the Heureka Science Centre in Helsinki, Finland, until January 27, 2012. This journey into the future sweeps visitors into glimpses of what may be ahead in health care, global development and our lives in the not-too-distant future.

One part of the exhibition is an animated display with world maps showing historic developments, current trends and possible projections for the future - covering a timespan from 1970-2050.

Nordpil researched, assembled and harmonized the data for these maps, creating a contiguous series for the entire time period for variables such as economy, population and biodiversity.

The indicators used in the animation are GDP for economy, GLOBIO3 species analysis for biodiversity, and population density for demographics. In addition, the historic and projected growth of urban areas is included.

To prepare the maps for the animation, Nordpil carried out research using existing data. The data was integrated and harmonized for visual impact, and in some places recalculated and estimated.

For more information, please see the 20X0 – A Journey into the Future website