Follow Nordpil on Twitter!
Save & Share this link on social media, for blogging and for bookmarking
Nordpil offers freelance consultancy services in custom map design and cartography, in illustrations (charts, diagrams and other graphics) and in geographic information systems (GIS) including research and data preparation. Map design includes interactive maps (WMS, ArcIMS) and thematic maps. In addition we provide training in better visual communication and map-making.
July 23, 2014 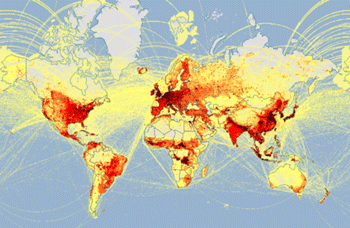 Globalis, a map-based educational website by the Nordic UN associations, was recently updated with a new portal on climate change. Hugo Ahlenius of Nordpil acquired recent climate data for the site, adapted it and prepared map presentations using MapBox and TileMill for the interactive map on the website.

Data added to the map services was primarily based on the recently published Intergovernmental Panel on Climate Change (IPCC) Fifth Assessment Report, and included:

The data was acquired, analyzed and examined using GlobalMapper and ESRI ArcGIS, and output maps prepared as large bitmap images. The images were further edited, where needed, in Adobe Photoshop.

The final maps were prepared using TileMill, styled in CartoCSS and uploaded to MapBox for inclusion in the interactive map.

The interactive maps can be viewed on the Globalis website (also available in the other Nordic languages):
http://globalis.no/Verdenskart