Follow Nordpil on Twitter!
Save & Share this link on social media, for blogging and for bookmarking
Nordpil offers freelance consultancy services in custom map design and cartography, in illustrations (charts, diagrams and other graphics) and in geographic information systems (GIS) including research and data preparation. Map design includes interactive maps (WMS, ArcIMS) and thematic maps. In addition we provide training in better visual communication and map-making.
August 1, 2009 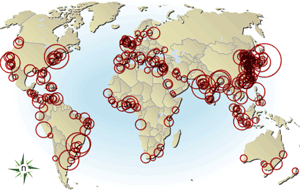 The award-winning video blog on space and astronomy, Astrocast.tv, recently published an episode on Climate Change and Sea Level Forecasting featuring a map prepared by Nordpil on coastal megacities. The episode was researched and presented by Bente Lilja Bye, and the map was prepared at her request, for this video in the Green Space - Green Earth category on Astrocast.tv.

The map was prepared using UN population statistics, and presents large cities with more than 1 million inhabitants in a zone of 100km from the coastline. These urban conglomerations may be threatened by changes in sea level or an increased frequency in natural disasters due to climate change.

The data prepared for the map, and high-resolution maps will be published during the autumn on Nordpil.com.

Read more at Astrocast.tv, and see the full episode.