The premier geographic information conference in Sweden is Kartdagarna, organized by the Swedish Cartographic Society. The 2013 event took place in Jönköping in March. Nordpil's work was represented in the map gallery by two posters. The map displays were entered in the society's annual map competition, and are candidates to represent Swedish cartography at the annual International Communication Association (ICA) conference to be held in Seattle, Washington in May 2014. 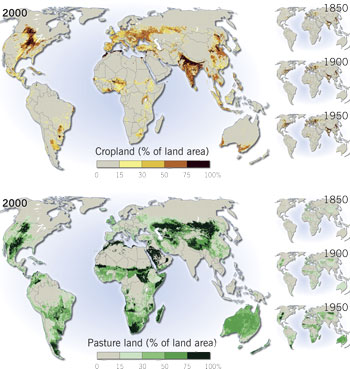 Agriculture in the World, 1850-2000, presents the development of cropland and pasture land in an easy overview. The data used is output from the HYDE 3.0 model, developed by the Netherlands Environmental Assessment Agency. The data was prepared and transformed using Geographic Information Systems (GIS) and graphic design software - ESRI ArcMap/ArcGIS and Adobe Illustrator.

A version of the map was originally prepared for the forthcoming book Water resilience for human prosperity, to be published in 2014 by Cambridge University Press.

The map was prepared by Hugo Ahlenius, Nordpil with input from Mats Lannerstad, Stockholm Environment Institute. 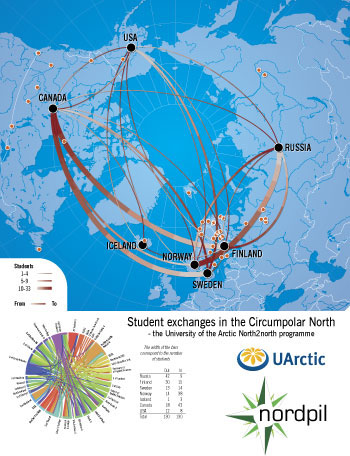 The University of the Arctic is a network of higher education institutions around the Circumpolar North. The North2north student exchange program provides a way for students from the participating universities to take in new ideas and to experience studying in another Arctic country. In all, 130 students from Russia, Finland, Sweden, Norway, Iceland, Canada and the USA participated in the programme in 2011.

The poster presents an overview of the member institutions in the program, as well as the flow of students between countries around the Arctic.

To supplement the map a circular flow-diagram was prepared showing, all participating institutions.