Follow Nordpil on Twitter!
Save & Share this link on social media, for blogging and for bookmarking
Nordpil offers freelance consultancy services in custom map design and cartography, in illustrations (charts, diagrams and other graphics) and in geographic information systems (GIS) including research and data preparation. Map design includes interactive maps (WMS, ArcIMS) and thematic maps. In addition we provide training in better visual communication and map-making.
November 5, 2010

Biodiversity, the Arctic and the International Community - new report from UNEP 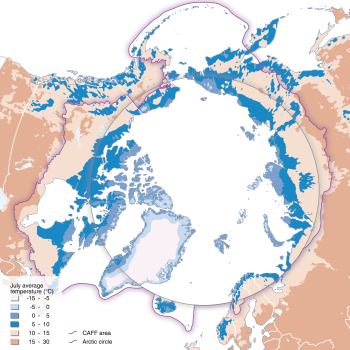 As a follow-up to a 2006 seminar, UNEP/GRID-Arendal has prepared a report on the status and implications of multilateral agreements and the environment for the Arctic.

The Arctic region covers the circumpolar north and the following countries: Russia, the US (Alaska), Canada, Greenland (Denmark), Iceland, the Faroe Islands (Denmark), Norway and Sweden. The region includes some of the world's least accessible areas and many of its last remaining wilderness areas. It is home to unique wildlife and is also inhabited by many groups of indigenous peoples with traditional lifestyles.

With climate change, oil and gas development and the possibility of the opening of new shipping routes, there are immediate threats to the Arctic environment.

The report Protecting Arctic Biodiversity examines existing conventions, such as the Convention on Biological Diversity (CBD), and other frameworks - primarily the working groups under the Arctic Council. Case study topics include wolverines, climate change, polar bears and many others.

The report is available for viewing and download at
http://www.grida.no/publications/arctic-biodiversity/

Maps, charts and diagrams are available at
http://maps.grida.no/collection/protecting-arctic-biodiversity