Follow Nordpil on Twitter!
Save & Share this link on social media, for blogging and for bookmarking
Nordpil offers freelance consultancy services in custom map design and cartography, in illustrations (charts, diagrams and other graphics) and in geographic information systems (GIS) including research and data preparation. Map design includes interactive maps (WMS, ArcIMS) and thematic maps. In addition we provide training in better visual communication and map-making.
August 5, 2014 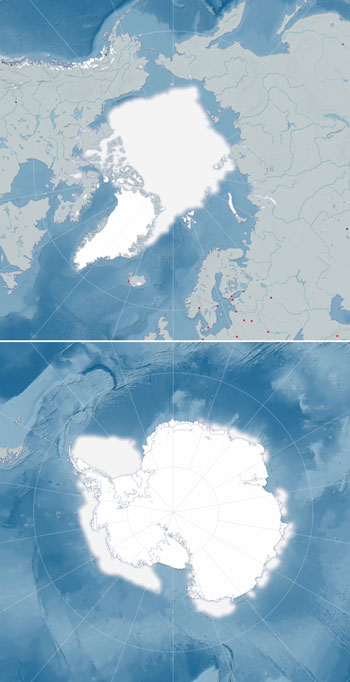 The Swedish Polar Research Secretariat is working on a new website and portal presenting its work. The main interface will be an interactive map interface. Nordpil was assigned the task of assembling a database of GIS data for the polar regions, including both the Arctic and Antarctica. From this database a background map was prepared using TileMill and MapBox.

The database was primarily based on the Natural Earth dataset collection and the data was projected, reviewed and edited using QGis and ESRI ArcGIS. Additional data was pulled in for the digital elevation model, from the Global Multi-resolution Terrain Elevation Data 2010 (GMTED2010) dataset and International Bathymetric Chart of the Arctic Ocean (IBCAO) dataset. For Antarctica data was also downloaded from the Antarctic Digital Database Version 6.0 (ADD). Sea-ice extent data was acquired from the National Snow and Ice Data Center (NSIDC).

The background elevation was further edited in Adobe Photoshop, with styling inputs from project participants from the Bror Rudi agency.

The map data was styled using CartoCSS in TileMill and then uploaded to the MapBox service.

The background map will be integrated into the upcoming website using additional interactive tools and a JavaScript viewer interface.