Follow Nordpil on Twitter!
Save & Share this link on social media, for blogging and for bookmarking
Nordpil offers freelance consultancy services in custom map design and cartography, in illustrations (charts, diagrams and other graphics) and in geographic information systems (GIS) including research and data preparation. Map design includes interactive maps (WMS, ArcIMS) and thematic maps. In addition we provide training in better visual communication and map-making.
May 14, 2012 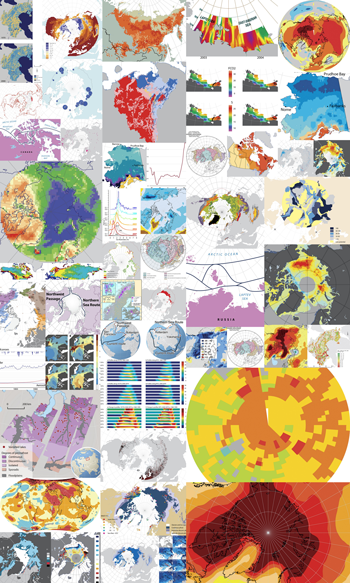 Hundreds of scientists from all over the world have collaborated to create the most comprehensive study to date on the cold and frozen parts of our planet's northernmost regions. The assessments in Snow, Water, Ice and Permafrost in the Arctic (SWIPA) represent an important milestone in the study of climate change and its impacts.

The report examines changes in snow cover, temperatures, glaciers, ice caps, permafrost and sea ice. A key finding is that virtually all parts of the arctic's frozen regions are being affected by increases in temperature. Released in April 2012, the report is the result of many years of work and includes contributions from a diverse range of institutions.

Nordpil supported the report editors at the Arctic Monitoring and Assessment Programme (AMAP) secretariat by researching data sources, communicating with scientists, and preparing and converting data for maps and charts.

To learn more about the Snow, Water, Ice and Permafrost in the Arctic (SWIPA) report, visit
http://amap.no/swipa/