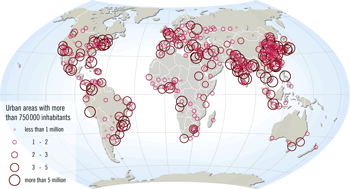 Large cities in 2005. See below for Google Earth view, and animation video.

We are happy to share data that we prepared for a project earlier in 2009. Using the data request service provided by the UN Population Division, we have assembled and georeferenced the data from the World Urbanization Prospects, 2007 revision. This database represents the historic, current and future estimates and projections with number of inhabitants for the world's largest urban areas from 1950-2050. The data covers cities and other urban areas with more than 750,000 people.

Data was retrieved from World Urbanization Prospects: The 2007 Revision Population Database (online database), accessed June 8, 2009. The population data was related to the ESRI Data & Maps 2008 cities dataset, where names matched, and coordinates for matching cities were retrieved using Hawhts' Tools. Cities not matched were researched using Google Earth and Wikipedia on June 9, 2009. Most coordinates were retrieved from the coordinate pages on the latter source (toolserver/geohack). The data was rendered as an event layer in ArcGIS, and then exported as a shape file. The exercise was performed using Microsoft Access and Excel, in combination with ArcGIS and Google Earth Pro.

The database is available for unrestricted download, under the Creative Commons 0 License (public domain). This entitles you to reuse and modify the data, without any restrictions. We appreciate if you credit Nordpil and the UN Population Division.

To the extent possible under law, Nordpil has waived all copyright and related or neighboring rights to World database of large urban areas, 1950-2050. This work is published from Sweden.

The database is made available in various formats for use in GIS software (such as ArcGIS, uDig, MapInfo, QGis, Global Mapper and Manifold) and in spreadsheet/table format for use in Microsoft Access, Microsoft Excel or other similar software.

We appreciate your comments and are aware that the data can be improved. Please use the feedback form to contact us. 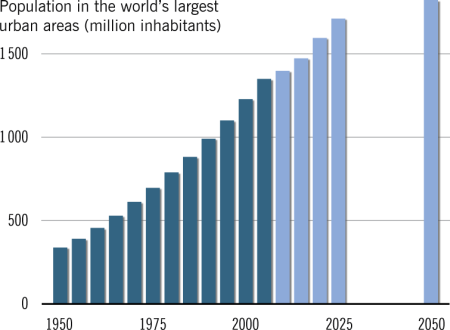 To the extent possible under law, Nordpil has waived all copyright and related or neighboring rights to World database of large urban areas, 1950-2050. This work is published from Sweden.

Based on work at UN Population Division, http://esa.un.org/.