Follow Nordpil on Twitter!
Save & Share this link on social media, for blogging and for bookmarking
Nordpil offers freelance consultancy services in custom map design and cartography, in illustrations (charts, diagrams and other graphics) and in geographic information systems (GIS) including research and data preparation. Map design includes interactive maps (WMS, ArcIMS) and thematic maps. In addition we provide training in better visual communication and map-making.
Previous Next Portfolio gallery 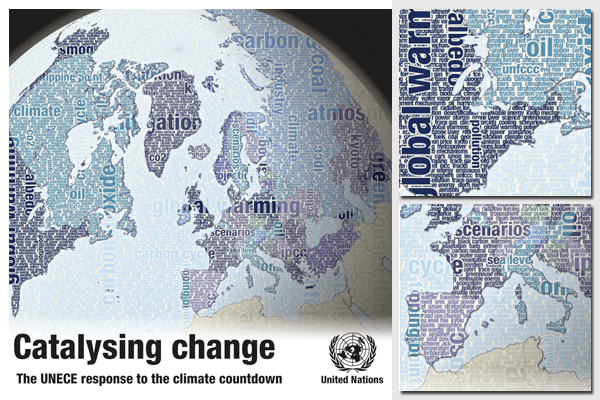 The client asked for a powerful illustration to frame the report—an illustration that both captures the complexity of climate change, but also the diverse UNECE region. This region, encompassing 56 countries in most of the Northern hemisphere, is a challenge to present in a map, without resorting to a world map. In this map a fake globe perspective was used, where the Atlantic has been squeezed by moving Greenland, Iceland, Svalbard and North America closer to Eurasia.

ESRI ArcGIS and Adobe Illustrator were used to prepare the map.

For more information, please refer to:

Do you need powerful, clear and good-looking illustrations?

Nordpil specializes in creating the best maps, charts and diagrams for high-profile publications, please contact us and describe your needs, and we will get back to you with a quote.

Would you like to learn how to prepare better maps, charts and diagrams?

In our training workshops you will learn about the theory about creating powerful visual material based on scientific data and statistics, and we discuss and deconstruct examples from recent publications, news and your work. Read more on our workshop pages.